November 10, 2021 · by 2oldguyswalking · in ALL TRAIL REVIEWS, UNCATEGORIZED · Leave a comment

Since this one is quite a ways from the 401, I’ll give directions from the nearest town of Haliburton. Take Highland St West (Cty Rd #1) out of Haliburton for about 5 kms to Cowan Rd (on Google Maps the road is named “Cowan” but on the road it’s called “Gould Crossing”). I’ll admit that we had some difficulty in even finding Gould Crossing road. I actually had to set the GPS on my tab to “Cowan Rd” on Google Maps, to find the correctly named Gould Crossing Rd.

Gould Crossing Rd is OK to drive, but the last little ways to the Reserve can be a bit nerve wracking in a low riding Honda. It’s kinda twisty, rocky, steep, and washed-out, but we made it alright. Just before the parking lot, there appears to be a two car parking area, but continue past that to the actual parking lot (signed with a white “P” on a green circle). This link will open Google Maps at Gould Crossing Rd. : https://goo.gl/maps/W4i4uXHVhLv7nFkY7

The parking lot is a bit odd too. There’s a building which is signed as a private residence with no trespassing, and another sign instructing you to angle park.

Anyway, once we got parked and backpacked-up, the main Heritage Hike Trail is (typical of the Haliburton Highlands Land Trust) very clearly marked right at the parking lot and throughout the entire trail system. There are also “you are here” maps throughout the trails. There are two side loops off the main Heritage Hike Loop Trail named “Waterfall Way” and “Ridge Trail”. The HHLT hasn’t listed the individual trail lengths yet, but the entire system is reputed to be about 7 kms. 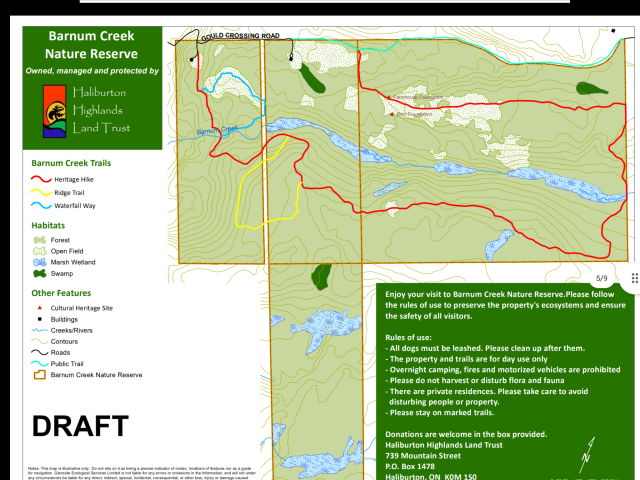 We walked around the vehicle barrier and headed off a short distance down the Heritage trail to the Waterfall Way (marked very clearly with blue triangles on trees). This was where the hilly nature of this reserve first made itself apparent. There’s a bit of a climb up and over a hill, and then a decline into a deep, dark (and pleasantly cool in early August) cedar forest. The sound of water splashing became slightly audible and the trail began to follow alongside a pretty little deep woods stream with many small waterfalls producing that babbling brook sound we all find so calming. We spotted some brightly coloured cardinal flowers right in the water here. The trail ends at a fresh, newly constructed bridge, where it re-joins the Heritage Hike trail.

We tried walking back on the Heritage Hike to see what we might’ve missed by taking the Waterfall Way, but were thwarted by flooding. They must’ve had some serious rainfall lately around there as any low spots on the trails were rather wet and muddy, but nothing we couldn’t walk around (except that spot on the Heritage Hike between the two offshoots of the Waterfall Way).

So, we crossed over the stream and continued walking until we saw the green sign for the Ridge Trail, and the other sign that warned us of the steep sloping trail ahead. I’ll warn you now … heed that sign. It required our feet and both hands to scale that ridge. There were a coupla spots where I was seriously concerned the Wife might be treated to the spectacle of her old guy, cartwheeling down the hill past her. The fact that the trail was wet actually kinda helped, as it made our feet stick to the ground. Nature kindly provided a coupla tree trunks in just the right spot to assist as well. To put it simply, I wouldn’t recommend trying that climb to many of our fellow senior citizens.

Once we crested the ridge, I’m sorry to report there wasn’t much reward for our efforts. There weren’t any particularly impressive views beyond the straight down visual from the ridge. We were hoping for a lookout of some description, even though (to be reasonable) there was no mention of one on the map. Surprisingly, there was a great deal of traffic noise from up on that ridge as well. In fact the only reward we got, was to climb down the ridge and have to climb back up another one, not far beyond the first. Not far beyond, and not much safer a feeling while doing it either.

However, once past the second climb, the trail became quite pretty and comfortable walking. Once we returned to the Heritage Hike trail, we discussed how, next time, we’d heed the warning signs and continue past the first offshoot of the Ridge Trail, to the second one. Then we’d just walk it back until we came to the downhill slope, where we’d just turn back to the Heritage Hike Trail.

That was it for the offshoot loops, and the remainder of the walk was the Heritage Hike Loop. This trail is well canopied, providing lotsa comfortable shaded walking for about 75 – 80 % of it’s length. However, there are a few open sky spots. Of particular note was a sea of bracken ferns we waded through in full sunshine before plunging back into canopied forest. This was the point at which the Wife pointed out the height and majesty of the trees here. We passed a wetland and a coupla small streams where we caught sight of more cardinal flowers.

We passed a few massive glacial erratics before bursting out of the forest onto (what I assumed to be) the open air former farm fields. A nice change from the deep, dark forest. You’ll notice all kinds of rock piles in this open area. I’ m guessing they’re fieldstones, removed to allow crop farming, but it seemed to me there wouldn’t be much soil over the bedrock outcroppings I could see everywhere here.

Another short plunge back into forest before encountering Gould Crossing Rd. Signage clearly shows you (of course) which way to go, to return to the trailhead (that “of course” may seem trivial, but … you wouldn’t believe some of the trail markers we’ve seen on other trails). We enjoyed a handfull of raspberries picked from the side of the road, and marvelled at the twisted outcroppings of granite, which often served as the road’s base.

This set of trails is a pleasant walk through a mostly canopied, and rather hilly forest. I don’t mean hilly as in like the Ridge trail. I just mean the rest of the trails are on very undulating terrain. The trail widths are a blend of two at the shoulder, and single file. The open sky section on the North end provides a change from the deep forest. It was also fairly wet and muddy in many low spots. It might’ve been from rain, but the consistant use of “walk around the mud hole” paths were quite evidently worn into the ground.

Of course, the proliferation of amphibian life had the Wife all excited (loves frogs and toads, she does), and the forest rang with bird song. The early part of the Ridge trail, and the South-Western section of the Heritage Hike had some traffic sound from Gelert Rd only 600 meters away. A surprisingly busy road on a Tuesday in August. Otherwise, the trails were quite silent.

There’s parking for about ten vehicles (at no charge) and no facilities. Remember that Google Maps erroneously shows the Gould Crossing Rd access, as Cowan Rd.

Have a nice walk,