UPDATE – May 19, 2021 – Our reader, Stacy has reported a No Trespassing sign at the Crowley Line access to this Cons. Area. I have contacted the Otonabee Region Conservation Authority and was told that the No Trespassing sings pertain to the private properties on each side of the green gate. So, you can still access this area by going around or over the gate and walking down the public access to the pits. The gate is just to prevent motorized vehicles access.

UPDATE – October 26, 2019 – Dropped in here on our way back from Peterborough. I haven’t seen it in a few years, as it’s pretty small and there’s no established trail system. But you know, it’s so peaceful and secluded, I’m gonna drop in more often.

This is a rare treat for a trail reviewer. The Otonabee Gravel Pit CA appears to be unknown on the INet. Its not often a trail reviewer gets the chance to be the first to report on a Cons. Area. Admittedly, its not exactly a hiker’s paradise. Its more of a Wildlife Area really, as there are no facilities, no groomed trails, no picnic area, no nuthin’. Just an old abandoned gravel pit full of ponds, which in turn were full of waterfowl, and a wooded surrounding area. 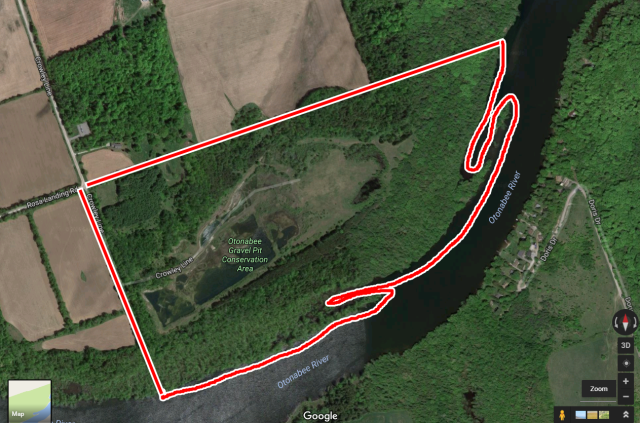 You’ll note the area is quite a bit larger than was used for gravel extraction so there’s a great deal of wooded area to wander through to the North, East, and South of the pit. There are, of course, numerous ATV trails through the wooded areas which I found quite convenient for walking.

The entire South end runs along the Otonabee River, and the North end is cultivated fields. So, even though the network of ATV trails are neither labelled nor documented, you couldn’t get lost for too terribly long. To the credit of the site, I spotted only one spent shotgun shell and two beer cans in the entire area. Not bad for such a secluded location, rich in waterfowl.

Ranger and I met, and chatted with a retired MNR guy who was birding. I expressed my surprise at seeing anyone there, and he told us he’d never seen anyone there before either. Despite the obvious ATV tracks and trails, there was very little evidence of anyone having visited recently. As we walked amongst the numerous crystal clear ponds left by the extraction process, I unconsciously looked for fish lolling about. Of course, there weren’t any, but we have seen stranger things.

I can’t say as we spotted any fascinating or unusual plant life. But then, this Summer has been so hot and dry, the only interesting or unique plants I’ve seen are in my own wildflower garden at Home. However, the grasshopper population was as I haven’t seen since childhood.

This one is really “out of the way”. Take Hwy 28 North from Port Hope to Bailieboro. Turn right on Cty rd. 2 just past the bakery. Follow #2 East until you hit a stop sign, then continue to the left. Once you cross over Bensfort Bridge, start looking to your right for Crowley rd. Turn right (South) on Crowley and drive to the gates. There’s no signage of any kind designating it as a Cons Area. UPDATE September 25, 2019 – Now that I know how to do this, just click on the link below to open Google Maps at the parking location  :

Have a nice walk,