Alright boys and girls !  Here’s a riddle for ya !  What’s the difference between a Conservation Area (CA), and a Wildlife Area (WA).  You give up ?  OK, Wildlife Areas aren’t knee deep in walkers and their dogs’ sh!t bags, and Conservation Areas aren’t knee-deep in shotgun shells and beer cans.  Though I’m not suggesting a relationship between the shells and the cans, I was a bit concerned at the proximity of the beer cans to the shotgun shells in one particular WA near Brighton.  As for the dog’s sh!t bags I think I made my point quite clear in my posting An Open Note to Dog Walkers.

There are exceptions to every rule mind you, and Darling WA was one of them.  We were shocked to see one shotgun shell on the ground (just one).  Now, I suppose I can understand (not condone) why someone would feel they should be exonerated for leaving a bag of dog sh!t on a trail somewhere.  I mean, really.  I’m guessing that, taking the air with the corgis in the fashion of Elizabethan gentry would be somewhat hindered by knowledge of the odious contents of the bag in hand.  That’s still not an excuse to fling it up into the trailside branches to the delight of, no one.

However, an empty shotgun shell with no less fluorescent colors to assault the eye than the offending canine treasure bag, weighs less than 10 grams.  It cools off before you could bend down to pick it up. It wouldn’t be hard to do, and isn’t asking alot is it ?

Back in 1968, I was young and I liked to drink beer just like I do today.  I like to drink it outside too.  So, yeah, I understand.  All I ask is that you consider these points.  Beer cans are aluminum, hence recyclable.  They weigh about the same as a spent shotgun shell, can be crushed under foot to less than a ¼ inch thick, and the beer store will give you five cents toward the purchase of more of the same.  Helluva deal eh ?  If I were to stand on the street corner offering deals like that with mind-altering, addictive substances I’d get my dumb ass arrested !

Sorry, I have no idea what spawned all that, but I swear I’m getting worse.  My original intent was to write a trail review as I promised to start doing  4 postings ago.

On to my subject now.  I first saw Darling WA on my tab while playing “armchair explorer”.  When I hit the satellite view button, I couldn’t see a parking lot, a johnny-on-the-spot, any buildings or trails … nuthin’.  So I made arrangements to visit it that Wednesday with Ranger.  It looked much more promising than other WAs we’d tried to find.  Birdsall WA was a disappointing cruise down a trailer park driveway to realize the WA was a totally inaccessible swamp somewhere to the west of the road. 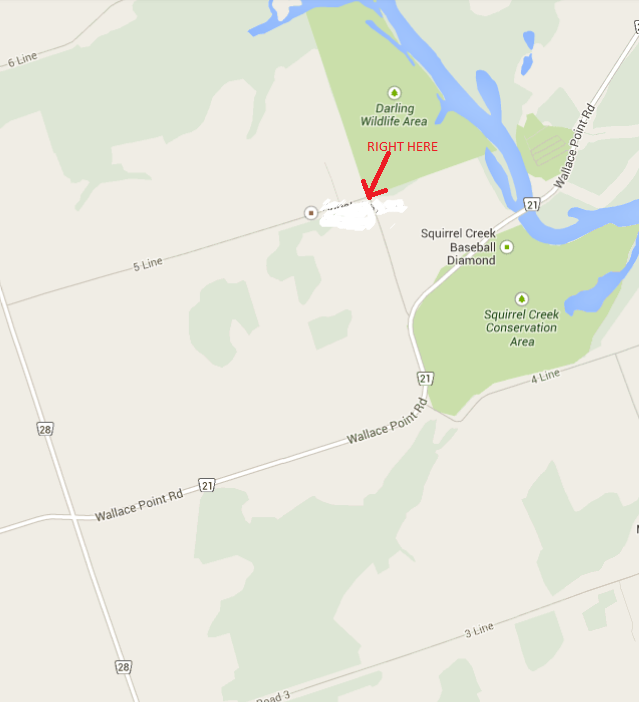 It’s very easy to find Darling.  Take Hwy 28 North out of Port Hope to the 5th Line – turn right on it – drive until you have to turn right again, and the WA is right there in the corner. Click on the link below to open Google Maps at the exact location to determine your own route :

There’s nowhere to park but on the roadside, and the sign might’ve fallen off the tree.   Just walk straight into the corner, through the trees and bushes and you’ll come upon a trail leading you to an open meadow with a rundown shack directly in front of you.  That’s where the trail ends. You might see something of a trail or two meandering off into the meadows and trees, but they’ll disappear soon enough.

Despite Ranger’s adventurous (that’s pronounced suicidal) tendencies. I wouldn’t recommend you step right into the shed and jump on the floor boards (8 feet above the pit under the floor) to prove to your hiking partner that it’s safe.  It was safe for him at that time, but you might not be so lucky.  Oh I almost forgot to mention Frenchman’s creek.  We walked over it and didn’t notice ‘til we were coming back out.  It’s a pretty enough little stream, but for some reason we found it funnier ‘n hell and still make references and comparisons to it while taking a relief trail down a No Exit road.

The terrain is quite diverse with everything from open meadows to fake forest (man planted rows of pines) and some naturally mixed forest as you approach the Otonabee River.  The banks of the river are totally untouched, heavily overgrown with shrubbery, very swampy, and unstable to walk on.  You’re not going to get much of a river view on this trip.  The river did seem to be rather flooded as those trees couldn’t possibly survive out in the water like that.  So, at a later time in the season, the shoreline might be a bit more defined, but I suspect it’d be pretty sloppy regardless.

The area was obviously farmland many years ago as my Historian partner pointed out the toppling fieldstone walls and the collapsed cedar fencing occasionally visible through the trees.  There were even recognizable furrows in the ground the mixed forest was growing on.  None of the trees were very old either which indicates farmland reverting back.  No foundations located though.  Ranger woulda loved that.  The East and North boundaries are the Otonabee River, and the West is a cultivated field.  To the South is an impenetrable swamp.

Interestingly enough, as we took a seat on a rock for a rest and a look/listen around, I placed my bag right beside a fresh surveyor’s spike (#712).  What are the chances of that happening ?

There was a distinct lack of birds both visually and audibly, though someone had maintained the bluebird boxes in the open meadows.  To be fair, it was May 1st so there wouldn’t be alot of birds yet anyway.  Still I’m used to at least hearing chickadees, blue jays, some kind of woodpecker, or something when I’m walking in a remote area.  I was born and raised in Toronto with only a few weeks in Summer spent in the bush, but Ranger was born and raised on a farm in rural Southern Ontario and he looked to be at Home there.  At one point, he got that distant look in his eyes when some configuration of trees put him to mind of a fort he built as a kid.  I knew he was very far away when he mentioned a name he never mentioned before or since.  He made numerous references to his childhood while walking around in there, so if you were born in the 40s on a farm in Southern Ontario, this WA will likely be a walk down memory lane for you too.

The terrain is fairly level without any serious trip hazards.  The trackless forests near the water are fairly negotiable if you want to do a “wander”.  Otherwise the rest of the forested areas are quite easily navigated.  There weren’t any dump sites (from either century) and that’s a big plus right there.  My only problem with it, was that I’m older than any of the trees I saw.  That says to me, it isn’t old enough to have established any unusual or rare plant life under those trees, nor in the meadows around them.  Former farmland needs a good century or longer to return to interesting.

It was a lovely, easy walk, on a remote tract of land, on a pleasant day, with a dear old friend.  I can’t think of a better way to spend a day.